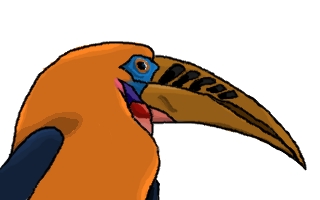 These vibrant-colored birds can be found mostly in southeast Asia. The one shown here is an original illustration of a male rufous-necked hornbill.

These hornbills are impressively large with downwardly curved yellow bills and black barcode-like stripes. There are rings of striking blue around the eyes and wings dipped in the color of slate with hints of navy blue here and there. Surely, the appearance of this bird is a sight to behold.

These birds live in places like Bhutan, Thailand, China, Laos, Vietnam, India, and (of course) Myanmar. They are mostly found in dense, evergreen forests. Unfortunately, due to the cutting of trees (habitat loss) and the act of hunting, there has been a decline in population. Although there have been organizations and groups to protect these creatures, the decrease in their numbers are not slowing down.

This hornbill is known as a symbolic figure for the Chin people (upper western part of Myanmar). The government has been urging the local people to do as much as they can to conserve and protect them in hopes of keeping one of the most historical animals of Chin state alive. I too believe that these magnificent creatures of flight should definitely be cared for a little bit better so that they can roam free with no fear of being hunted.

It doesn’t have to be only for this particular species either. There are hundreds of animals out there that live in fear of being hunted down or not having their own habitat to depend on. This has been a serious problem for years. It is heartbreaking how their population is slowly declining. Great White Sharks, African Lions, Black Rhinos, and so many more: they are being hunted by us humans, for (I’m forlorn to say) ridiculous reasons. Lives are being put to an end for personal enjoyment or profit. The rufous-necked hornbill is just one of the animals that are facing these problems.

What can you do to stop this problem? To finally put an end to this once and for all?